I caught up with Claire to get some insider tips on her training regime and how’s she’s found the transition to elite cyclist.

1.Tell us a bit about yourself?

I started out as a runner / hockey player / generally really enjoyed fitness and sport. I decided I wanted to give duathlons a go and went to my local bike shop and bought my first bike, a specialized dolce. After qualifying for my first world championships I decided it was time for an upgrade to an aero road bike and bought a LIV Envie, I loved her, I still do!

I spent 3 years (2015 – 2017) competing as a duathlete but over time it became clear that I really enjoyed the cycling more than the running and that was reflected in my training and my results. 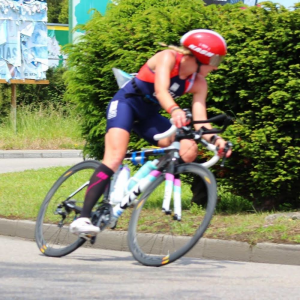 My next bike purchase was a LIV Avow, I decided I needed / wanted a TT bike for my duathlons and also that it would be nice to try to time trials. I absolutely loved the time trials although it took a bit of time to get my head around the idea of leaving it all on the bike, I always had the awful 2nd run in the back of my mind!

In June last year I decided that I wanted to try some road racing and entered some local crits and then braved some bigger road races. At my 3rd road race I met the wonder Terry Williamson and he offered me a place on his team, Fusion Velo Performance for the 2018 season. I was so excited about this opportunity and it helped me finally make the decision to stop running for a while and just focus on racing on the bike.

2. You had a lot of success as a duathlete, winning international age group races outright – what made you decide to focus purely on cycling?

I’ve spent most of my life running, from cross country races to track. I didn’t ever take it particularly seriously but it was always a part of my life, even when I was just playing hockey at uni, I would still go for the occasional run for fitness. 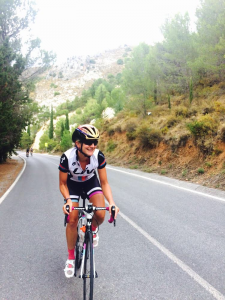 I started cycling relatively late (27) but found that after 6 months or so of training I was making pretty good progress! I’ve always loved running but cycling presented a new challenge, not just the physical aspects of it but everything that there is to learn about the bike. The mix of the physical and the mental challenge really appeals to me and racing on the bike made me happy, happier than duathlons did.

I would always choose to go out on the bike rather than go for a run. Running started to feel a bit like a chore and something that was stopping me from spending time on the bike. That’s when I knew it was time to stop duathlons, at least for a while. I didn’t want to get to the point where I hated running.

3. Since turning to road racing have there been any lessons you’ve learnt the hard way?

4. What does a typical training week look like for you?

I tend to have one rest day a week, although that day varies depending on travelling, racing and what phase of training I’m in

I will have a couple of shorter rides, one of which might be fasted.

A couple of longer rides around 80 – 100km, one of which will probably be in the mountains.

A set structured sessions with intervals. 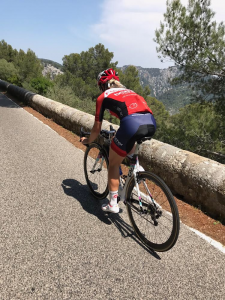 5. With a background as a personal trainer you are real advocate for strength and conditional training. What are your top 3 S&C exercises for cyclists?

Plank – Simple but when done well it is so effective

V-Sit Single leg extensions – A great one for isolating the core, keeping it fully engaged and then working your legs independently

Bulgarian Split Squat – Unilateral leg exercises are so important for cycling. This is a personal favourite of mine. It’s a really great exercise for encouraging glute recruitment, something that a lot of cyclists struggle with.

6. What top tips would you offer any ladies thinking of giving road racing a go? (me!!)

Do some group riding first and get comfortable with other riders around you. If, like me, you’ve spend a lot of your time doing non drafting duathlons / triathlons then your first venture into bike racing has probably been time trials because it is so similar to the bike leg of a multisport event. Road racing is completely different, following wheels, picking the right wheels, being comfortably with someone close enough to touch your handlebars, getting the odd elbow, someone giving you a tap and gently moving you out of their way etc. I think it is important to get this experience outside of a race setting, for both safety and confidence.

7. Having achieved so much already, can you share your proudest moment and what made it so special?

Winning gold at my first world championships in Adelaide! It was such a great feeling and my family was over there with me to share the experience.

8. And finally, what have you got planned for the rest of the season? 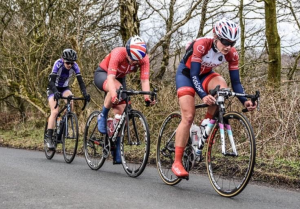 e rest of the national series road races and hopefully I will make the squad for the Tour of Ireland too but I’m going to have to wait and see!

Claire has also recently set up Isle Of Tri, which aims to empower women through multisport so be sure to give them a follow. 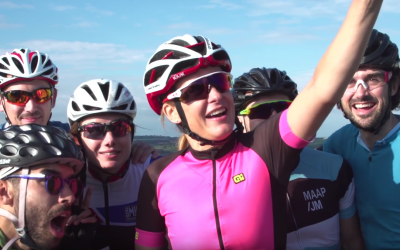 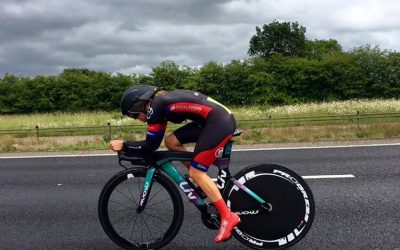 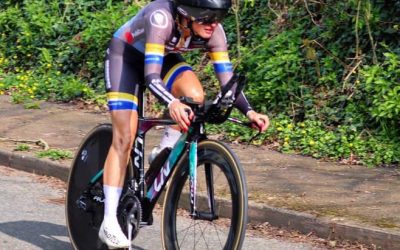